Hi there, I assume the only reason you’ve clicked on this link is because you’re thinking WTF does RBF mean cause IDEK LOL SMH.

Let me enlighten you: the infamous ‘RBF’ stands for the much-too relatable ‘Resting Bitch Face’, one which many of us women fall victims to, through no fault of our own. Now, don’t get me wrong, I’m not impartial to a good RBF meme and using it as an excuse for the ‘slapped-arse’-face-by-default that I apparently exhibit. Everyone’s gotta make fun of themselves. And now for said RBF meme: 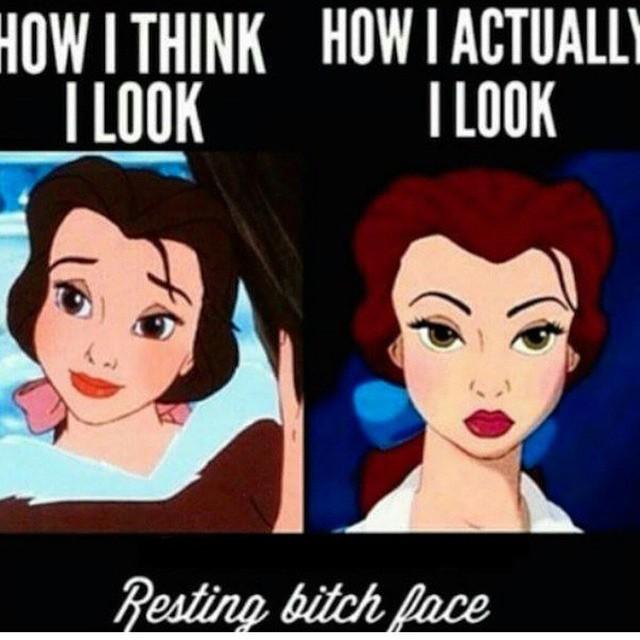 Now, if you’re all for the RBF and what it actually stands for, you probably won’t enjoy the following. Or like me, you may actually be like WTF, how did I not notice this?!

Reading an article from Cosmopolitan shed a whole new light on this seemingly harmless term which has frequently used within the millennial vernacular. Even googling ‘Resting Bitch Face’ just now has sent me to a page filled with photos of poor Kristen Stewart just looking, well, just looking like she is. And how the eff is that fair? I don’t mean to put my crazy feminist ranting hat on, but the ratio of women to men on said search was a hefty 8:1. And yes I know that calculation is probably wrong because I haven’t done a maths equation since 2011.

Maintaining my point, and one which was so very aptly raised on Cosmo’s Snapchat ‘news’ feature: why should women have to look so damn happy all the time? Do men have this issue? Oh no, if anything they are encouraged to look ‘smouldering’ and ‘mysterious’, yet when we’re doing whatever we’re doing with a nonchalant expression, we get yelled at to “Cheer up, love!” – works every time, lads! Not.

I’m not suggesting that this is a radical thing that MUST CHANGE EFFECTIVE IMMEDIATELY. I’m just giving y’all some food for thought. Are we seriously still judging people by what they look like? Are we still there? If anything, this is just valourising the fact that women aren’t allowed to naturally feel how they feel, look how they look and do what the eff they want without anyone having to pass judgement – wouldn’t that be the dream.

So, though the Resting Bitch Face, or shall we say more constructively, a face which happens to not be frozen in a permanent toothy grin, is a real 21st century issue for some gals, this doesn’t mean that she has to change to make people complain less.

Hey, maybe she had a shit day

Hey, maybe she lost someone recently or just